Paul Tout
Long-term (1989 to date) Italian resident, originally from UK, I'm an ex-teacher, passionate naturalist and environmentalist who works as a wildlife tour-guide and translator.

The Return of Old Snakey.


With its mad eye and snakey charm in the hand I've always had a soft spot for the Wryneck. I remember my first one (at Blakeney Point in the 1970s), the first one in the hand (at Rye Meads in Hertfordshire) and even one calling in the breeding season in UK (at the marvellous Warburg reserve in the mid-1980s). The signs have been there for a couple of years now that something was happening but this year it can no longer be denied. The Wryneck (Jynx torquilla) is on its way back in the Karst and more generally around the Northern Adriatic. The question is “Why?”. When I first came to Italy to live in 1989, the Wryneck in the  Italian Karst was already a rarity as a breeding bird (though still here and there in the Slovenian part). People told me it had been a common nester until the 1970s, wreaking havoc on nesting tits, tossing them out of natural sites it was able to enter. It declined precipitously in the 1980s, much later than the UK collapse (1920 – 1980) and had pretty well disappeared around Trieste as a regular breeder by 1995. We’d hear the birds on migration for a day or two and then silence. We rarely managed to hear them on our annual early May bird race when confined to the Provinces of Trieste and Gorizia but even around Udine – where the bird was always common in the Prealps - they were a struggle.

I have my own pet theory as to why the Wryneck (and Red-backed Shrike and many butterflies - such as the violet-eating Fritillaries - and moths) declined so much in Europe in the first half of the 20th century: Nitrogen. More specifically, the heavy use of fertilizers in agriculture, re-deposition of ammonia from slurry tanks and manure piles and the NOx emissions from vehicle traffic that have transformed marginal vegetation at a continental scale, favouring rank, shady nitrophilic plant species (such as nettles and dock) and penalising heliophile (sun-loving) insects that include ants, the Wryneck’s main food.

But recently, just in the last few years, since about 2015 to be precise, I’ve started bumping into territorial Wrynecks close to home once again in the months of May and June when any self-respecting Scandinavian bird would already on the breeding grounds. Around the lake at Doberdò, in vineyards here and there and occasionally for a day or two even in the garden. This year, however, there are Wrynecks EVERYWHERE! We saw and heard them on trips in (2nd – 9th & 14th – 21st May) virtually every day and everywhere we visited including Isola della Cona, a wetland reserve, where there are at least 2 territorial males close to the Visitor Centre and the Marinetta hide. The pair that were shouting at each other in my garden on April 9th have now quietened down but are still here and must be nesting nearby: 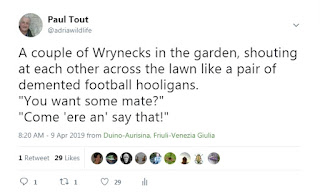 I found a dead chick Great Tit chick on the lawn yesterday evening, another possible sign that they are around. A friend in a neighbouring village called to say that the Great Tits in her Scops Owl nestbox had been turfed out with one corpse beneath the box and asking who the perpetrator might be? A Wryneck maybe? Driving around in there were Wrynecks leaping up from the short turf along quiet roads and the odd flattened corpse, the victim of collisions with vehicles.

As Wryneck densities rise their visibility increases disproportionately as birds in neighbouring territories call to one another while solitary pairs have no such stimulus and call rather rarely, usually an hour or so after dawn and just for a few minutes, so perhaps the perceived increase is rather less than the actual one? What on Earth is going on? Well…

You can set out a range of theories. Perhaps nitrogen deposits are declining and opportunities for heliophile insects are improving? Catalytic converters have certainly helped but N loads on farmland are continuing to rise and heavy goods traffic on the main – – motorway is many hundreds of times what it was in the 1980s with the Iron Curtain. Perhaps climate change is favouring the Wryneck although that needs to be set against what seems to be unrelentingly bad news for trans-Saharan migrants, almost all of which seem to be in decline for a range of reasons from habitat loss to the harvesting of birds in various areas around the Mediterranean. Wrynecks are certainly wintering in greater numbers in Italy and ever further north, even regularly in the Veneto, the Region around Venice. Perhaps the food supply has changed? Ah!!

I was in last winter and was amazed to see Cattle Egrets, Great White Egrets and Little Egrets in considerable numbers close to where I was living in . How much of that ‘boom’ is down to food supply and, in particular, the availability of abundant alien species such as the North American Signal Crayfish (Pacifastacusleniusculus) and the Iberian Green Frog (Pelophylax perezi) both present in ? What MIGHT be feeding the Wrynecks I’m seeing? Well…

Last winter I was translating a marvellous book into English, Il piacere degli api, (“The Joy of Bees”) by ’s best-known entomologist and beekeeper. It'll be a monster at 700 pages and will be published this autumn by the World Biodiversity Association, an Italian NGO of which Paolo is the president. In it he mentions a new but resolvable challenge to beekeeping in , the subtropical Argentine Ant (Linepithema humile), an alien species that exploits the heat produced by the honeybees’ winter cluster to survive the coldest months of the year, setting up home in the roof-space of hives before raiding the landladies’ eggs, larvae, honey and pollen as the weather warms up. He states that the bees often simply abandon the hive and its contents in toto before setting up home elsewhere.

Linepithema humile is an odd’un. This is from the Wikipedia entry:

“According to research published in Insectes Sociaux in 2009, it was discovered that ants from three Argentine ant supercolonies in America, Europe, and Japan, that were previously thought to be separate, were in fact most likely to be genetically related. The three colonies in question were one in Europe, stretching () along the Mediterranean coast, the “Californian large” colony, stretching () along the coast of , and a third on the west coast of .
“Based on a similarity in the chemical profile of hydrocarbons on the cuticles of the ants from each colony, and on the ants' non-aggressive and grooming behaviour when interacting, compared to their behaviour when mixing with ants from other super-colonies from the coast of Catalonia in Spain and from Kobe in Japan, researchers concluded that the three colonies studied actually represented a single global super-colony. The researchers stated that "enormous extent of this population is paralleled only by human society", and had probably been spread and maintained by human travel.
“They have been extraordinarily successful, in part, because different nests of the introduced Argentine ants seldom attack or compete with each other, unlike most other species of ant. In their introduced range, their genetic makeup is so uniform that individuals from one nest can mingle in a neighboring nest without being attacked. Thus, in most of their introduced range, they form supercolonies.

Now I’ve got no evidence that Wrynecks even eat Linepithema humile but could it be that the incredible densities reached by the Argentine Ant around the Mediterranean, especially in urban areas, have modified its food supply and overcome the decrease in ants that seems to have led to its initial decline and that - as in the case of certain grebes and herons in UK - an invasive species ‘problem’ actually represents an opportunity for one or more species. Answering that question is a job for some enterprising torquilla-phile to examine! I’ve no time I’m afraid.

As a kid I gazed at pictures of Wrynecks in books. I even remember reading about it in Richard Fitter’s old Collins Guide to Bird Watching (which is a great read, especially if you are new to birding, so you can ‘feel’ what has changed in your local avifauna over half a century): 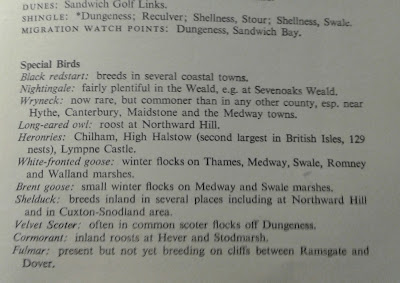 I love having a pair of Wrynecks in the garden … it was one of the ‘holy quartet’ with Hoopoe, Red-backed Shrike and Golden Oriole when I was a child. The Argentine Ant is unlikely to become established in UK away from thermophilic settings such as greenhouses, at least not for a while with climate change, and so won’t help the Wryneck become re-established anytime soon but I feel somehow reassured that the species is doing better around my part of the Mediterranean basin than it has been doing for more than 30 years.